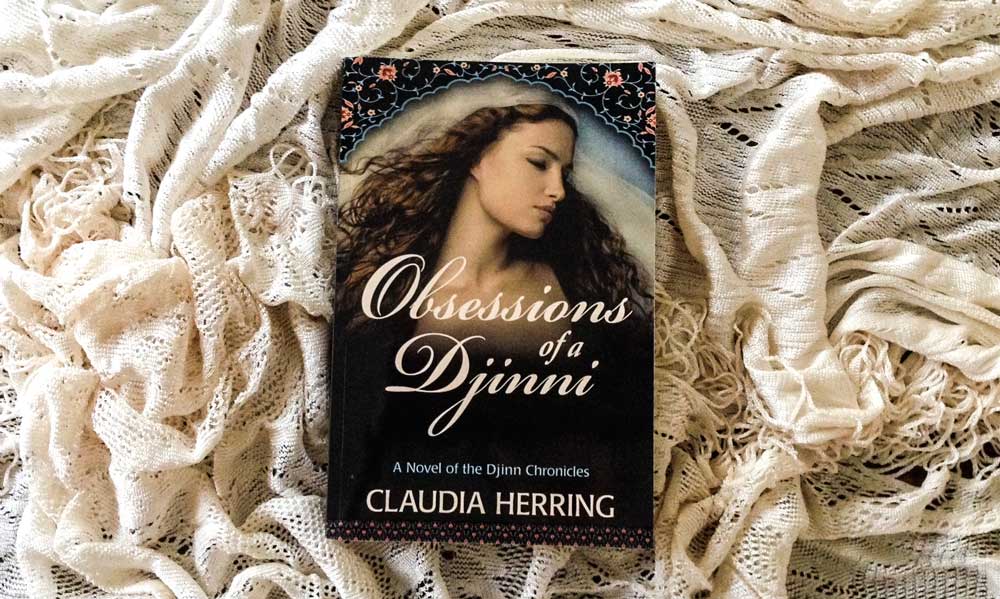 When I posted a survey of which twitter text I should use to promote the relaunch of my novel “Obsessions of a Djinni,” I received great feedback, and a reaction that took me unawares (YIKES! Will anyone read further, having now encountered the dated word “unawares”?)

Besides the majority who chose twitter promo two (see below), participants claimed the following:

So, for all those who were puzzled, here it is.

Djinni or genie was originally written in one of the Middle Eastern languages, such as Persian or Arabic, languages that don’t use Roman letters, which is the alphabet we use — A, B, C, etc. These languages use scripts we can’t decipher unless we know the language and its written script, so any spelling is what linguists call transliterated, meaning it’s written in Roman letters to approximate the sound of the word.

To better illustrate this, here’s an example from Accredited Language Services (https://www.accreditedlanguage.com/2016/09/09/what-is-transliteration/) :

Here are words in several languages:

Here are their Latin-alphabet equivalents:

Transliteration focuses more on pronunciation than meaning. Because the words are based on how a word is said, a word often ends up being spelled in different ways — hence DJINNI, GENIE, JINNI, etc.

In my novel, “Obsessions of a Djinni,” I used the older spelling “djinni” because the story takes place in 1811 England and other countries. At that time, spelling was in flux, as well as capitalization (which was seemingly arbitrary).

So now to the nitty gritty — the definition of djinni. Here’s a short one:

Any of a class of spirits, created at the same time as angels, capable of appearing in human and animal forms and influencing humankind for either good or evil.

Djinn are created from subtle fire — fire that is smokeless, that does not proclaim itself through smoke — thus they can easily conceal themselves from human senses. They have magic, can fly, can travel long distances in a short time, and live long lives.

Djinn appeared in The Thousand and One Nights, where Al-Addin (Aladdin), his lamp and djinnis (genies) were first popularly introduced to the West in the French translation by Antoine Galland in 1704.

Now that you know what I’m talking about, here are the results of my twitter promo survey:

A djinni, burdened with a dark secret, is thrown into a love triangle fraught with subterfuge in Regency England.

A djinni seduces his master’s young bride, forcing her to make a fateful choice.